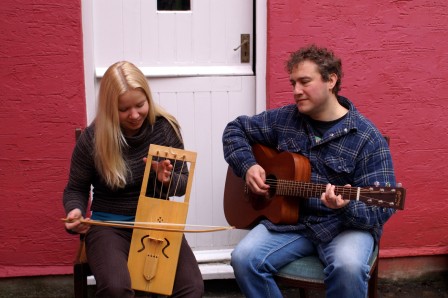 MARTIN LEAMON and SILLE ILVES formed their unique Welsh – Estonian collaboration shortly after the 2001 Viljandi Folkmusic Festival.
Since then they have developed a truly original fusion of two different musical cultures, rooted in tradition yet thoroughly modern, they create timeless music.

SILD (Estonian word for bridge) have recorded two albums for FflachTradd, Wales’ internationally respected traditional music label.
Both were recorded by Jens Schroeder and were produced by Ceri Rhys Matthews.
They have also recorded for the prestigious Smithsonian Folkways label, appearing with singer Julie Murphy on the 2009 anthology of Welsh music & song Blodeugerdd: Song of the Flowers.

SILLE ILVES is one of the finest fiddle players in her native Estonia and her adopted home of Wales.
She is also the leading exponent of the Hiiu-kannel (bowed harp), and an astonishing singer.
She has performed and recorded with many leading Welsh traditional musicians and was a member of Taran.

MARTIN LEAMON plays guitar; his style has been described as ‘magisterial’. Don’t miss their visit!!