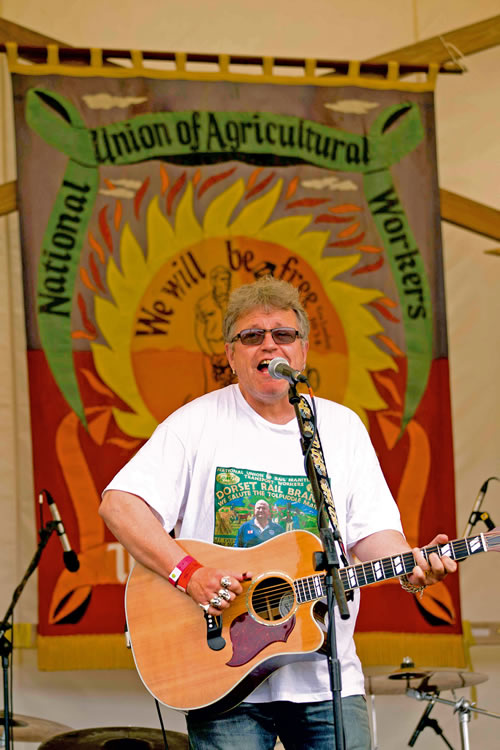 Robb Johnson is now widely recognised as one of the finest songwriters working in the UK today. “An English original”, (Robin Denselow, the Guardian) … “one of our best singer-songwriters ever” (Mike Harding)… a “renowned folk-punk” (Time Out). His songs feature in the repertoires of a wide variety of musicians, from folk legend Roy Bailey to cabaret chanteuse Barb Jungr, and he enjoys a similarly diverse spectrum of critical acclaim – “a modern-day Dostoyevsky” said the US’s Dirty Linen, Mojo made the double CD Gentle Men, a song suite family history of the First World War and its consequences, Album Of The Month, while The Daily Telegraph made it their Folk Album Of 1998. A revised version was recorded in 2013 to coincide with the centenary of the First World War featuring Roy Bailey Barb Jungr, and was again greeted with widespread critical acclaim. Tony Benn said Johnson’s “Winter Turns To Spring” is his favourite song, while Jeremy Corbyn’s favourite is “Bob Crow”.

He has played pubs, clubs, pavements, pickets and benefits, arts centres and festivals, local radio, BBC Radio 3 and 4, Belgian Radio 1, Nicaraguan TV and Channel 4, the Albert Hole in Bristol and, as part of Roy Bailey’s 1998 concert, the Albert Hall in London. In February 2006 Robb appeared at the Barbican as part of the prestigious BBC Folk Britannia series, where “for the encore, Robb Johnson leads all the artists (and the audience) in the World War I song (‘Hanging On The Old Barbed Wire’)” (BBC Folk Britannia website) in a concert that was screened later that month on BBC4.

Robb also plays extensively in Belgium, Holland and Germany, and he has toured Britain supporting Chumbawamba, and the US with David Rovics. For several years, Robb has also been a regular feature of the Tolpuddle Festival, where he comperes the main stage on Sunday. This led to him doing the same job at the Labour Live festival in June 2018.

Robb is a regular contributor to RNR magazine: he co-wrote Woman, a biography of Yoko Ono, with Alan Clayson and Barb Jungr, published by Chrome Dreams, and The People’s Republic Of Neverland: the Child versus the State, based on his experience of working as a teacher, to be published by PM Press in 2020.

He has worked with a variety of bands, with friend and fellow songwriter Leon Rosselson, as a member of the Anti-Capitalist Roadshow, as well as solo. Robb’s album Metro (released in September 2005) featured piano accompaniment by the late Russell Churney, who had previously worked with Julian Clary, Barb Jungr and Fascinating Aida). Again, the album received widespread praise in both music and national press: “unquestionably classy… excellent songs (that) show again what a fine, if provocative writer Johnson is” (The Daily Telegraph). Robb has also enjoyed working and recording with Brighton’s Hullabaloo Choir. His electric band The Irregulars gigs on an irregular basis, and generally features long-time friend and Irregular Records recording artiste John Forrester on bass and Robb’s Son Arvin Johnson on drums.

In 2016, PM Press in the US released A Reasonable History of Impossible Demands, a 5-CD career-retrospective, to widespread critical acclaim – reviewing it, the magazine fRoots said Robb is “one of this country’s most important songwriters (no argument!)”.  In September My Best Regards, was released, again to widespread critical acclaim, with some reviewers suggesting it was his best album to date. That Christmas Robb released a festive Christmas single “JC4PM for me” that resulted in TV appearances on The Daily Politics Show and Russia Today. 2017 saw the release of Songs From the Last Seven Years, a collection of unreleased songs chronicling events since the election of the ConDem government in 2010.

In November 2018 Robb released Ordinary Giants, a 3-CD song suite based on his father’s life and times. The album features contributions from over 30 performers, including award-winning Jazz legend Claire Martin, Justin Sullivan from New Model Army, Tom Robinson, and TUC General secretary Frances O’Grady, with Phil Odgers (from The Men They Couldn’t Hang) and Miranda Sykes as his mum and dad.

Robb’s label Irregular Records has facilitated releases by a variety of song-orientated artists, including Maggie Holland, The Men They Couldn’t Hang, Barb Jungr and Philip Jeays. He coordinated an album celebrating the work of Jacques Brel Ne Me Quitte Pas that has done much to focus a renewed interest in the chanson genre. He has translated several of Brel’s songs into English and performed concerts celebrating Brel’s life and work.

Your email address will not be published.