Project Adorno-Dennis Potter In The Present Tense- thursday 6th July 6pm – The Coleford Hub
Set font size: A A A 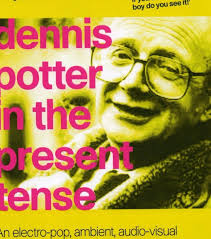 TV dramatist and playwright Dennis Potter was the ultimate Marmite figure – one minute delighting millions with musical plays such as The Singing Detective and Pennies From Heaven, the next causing outrage and controversy with productions such as Blackeyes and Brimstone & Treacle.

His mixture of hard-hitting themes (death, religion, sexual fantasy) was married to the mass medium of prime-time terrestrial TV. He was as much fascinated by the thought of his audience sprawled across settees amongst the cups and living room detritus, as he was to the impact and reaction provoked by his work. A doyen of the 60s/70s Play For Today school of drama, his work was designed to make one stop and think as well as be thoroughly entertained in the bargain.

In this performance piece, electro-pop duo Project Adorno present a contemporary interpretation of Potter, the man and his work, through an ambient segue of original songs, samples, spoken word extracts and visuals charting his journey from miner’s cottage in the Forest of Dean to international mass media acclaim – and ultimate redemption. A cubist biographical sketch told through live songs, electronic music, original video footage and pre-recorded voice extracts from people who knew or had some connection to Potter and his work.