Hollie McNish will perform and chat about material from her new collection ‘Plum’, which charts Hollie’s journey from childhood to attempted adulthood. Expect strong language as she talks about fruit and flesh, school discos, guilt, sex, politics, death, transformers and a lot of friendship. 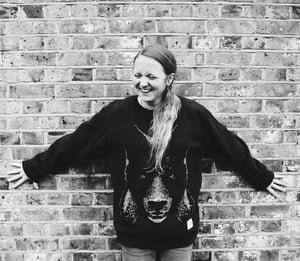 Hollie McNish is a published UK poet based between London, Cambridge and Glasgow. She has two poetry collections – Cherry Pie and Papers – and an album, Versus, which made her the first poet to record at Abbey Road Studios, London.
In February 2016, Blackfriars published her memoir of poetry and parenthood, Nobody Told Me. Taken from Hollie’s journals while pregnant and in the early years of raising her daughter, through the passages and poems she wrote, she explores raising a child in modern Britain, of trying to become a parent in modern Britain, of sex, commercialism, feeding, gender and of finding secret places to scream once in a while. It has sold incredibly well and garnered great reviews.

In 2017, Picador publish ‘Plum’ her third poetry collection.
“The world needs this book. It should be required reading for anyone thinking of having a baby, or even anyone who knows someone who is thinking of having a baby. And I can’t help wondering if these islands would be a happier and more pleasant place to live if Nobody Told Me was made a compulsory sex-ed set text in our schools. Politicians, please take note.” – The Scotsman

“Hollie’s poems are deep and delicate. They move across you in a way that’s so gentle you almost don’t realise how they’ve gone straight for the gut till you’re thinking of them, by accident, days later. She writes with honesty, conviction, humour and love. She points out the absurdities we’ve grown too used to and lets us see the world with fresh eyes. Her poetry is welcoming, galvanizing and beautiful. She’s always been one of my favourites” – Kate Tempest

“The things no one tells you before you have a baby are numerous – Hollie McNish turns them into epic poems about the transformation of your body and Mr Whippy vans. You’ll learn a lot.” – Grazia

“It’s a moving and profoundly personal account. Yet at the same time, Nobody Told Me offers an insight into the shared, unspoken experiences of many mothers.” – The Skinny