Comic workshops – one and two!

Masterclass One with Beano’s Kev F Sutherland comes to the Festival this year with a comic workshop on Tuesday 3 July at 4 pm in Coleford Library. Kev F writes and draws for The Beano, Doctor Who and Marvel comics, and now he’ll teach you how easy it is. After the end of a Comic Art Masterclass, everyone goes away with a comic containing a strip by everyone in the class plus an individual caricature by Kev F. Learn everything he knows, so you could leave school and steal his job! For age 7 and upwards.  Free event. 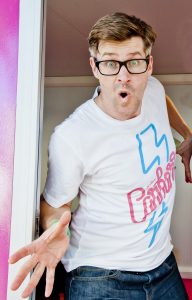 The Etherington Brothers have been making all-ages comic adventures for over a decade, and are the creators of the UK’s most successful comic Kickstarter campaign of all time with the first volume of their How to Think When you Draw series, along with many other titles. They have also created comics, stories and art for Star Wars, How to Train Your Dragon, Transformers, Kung Fu Panda, Madagascar, Wallace & Gromit and James Bond.

Using their unique blend of humour, improvisation and enthusiasm, they have empowered hundreds of thousands of children to take their first creative steps into the greatest storytelling medium on earth – COMICS!

Over the course of 60 frantic laughter-filled minutes, Robin will share the secrets of their success. Tips and tricks for making your own truly AWESOME comics and stories will materialise before your mystified eyes! Prepare yourselves for ANYTHING … but most importantly, for having fun!