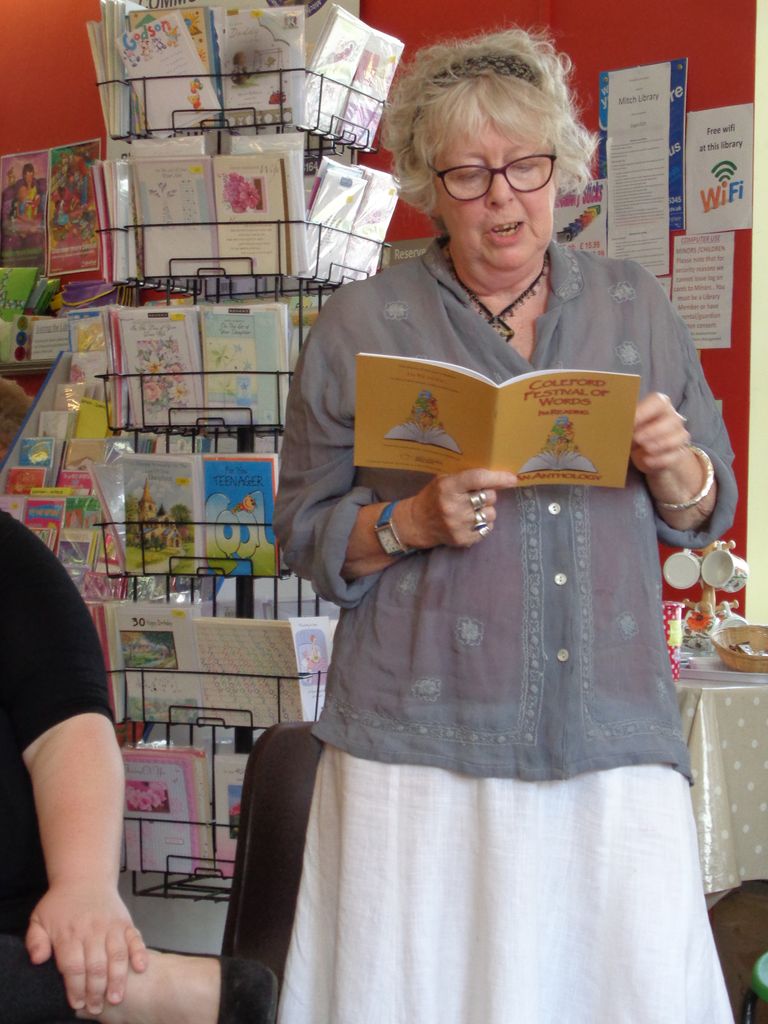 Deborah Gregory reading from the I’m Reading anthology published as part of this years Coleford Festival of Words programme of events.

It needed more flour but she pummelled on, relishing the stickiness, making an effort. Let the air in. Pick the dough up. Throw it against the table. And repeat. The hot kitchen was basting her. Again and again she punched the dough, leaving the imprints of her knuckles, then she pulled it into shape, bent her back and punished it again.
He had made her a promise: he would take her to Venice. “One day, when the peace it comes,” he had said. Talking, talking all the while in that comedy voice of his: “I show to you my city in the sea.” His golden, liquid streets. His gone-doe-las.
She relented, added flour, eased the dough from the table. Now she swayed as she worked, imagining the smile shaped boat, the moustach-ee-ohhed gone-doe-leer weaving through the Grand Canal with her and him spread at his feet, flotsam (or was it jetsam?) only two more lovers in a city full.
There. By the gods, this bread would be filled with hot air. By the gods it would. He had promised her. Well, now death had broken that promise as surely as bright Venetian glass will shatter when trodden underfoot. And she knew, oh yes, she knew, she must keep the shards of her anger under the carpet. Think how they’d condemn her, should they come to light. To be this angry when… Well, consider all the fallen: and every mother, sister, lover, now grieving for them.
Nevertheless, along with being sad as a hanging hare, she was furious, and mardy, no denying it…. because now, no matter what, no matter how long she lived or if she did or didn’t find another man to love and who loved her, she never could go to Venice. It wouldn’t be right. It wouldn’t be the same, not without him. “Where am I going to find another Italian Jig-hello in Kidderminster?” she asked the yellowed ceiling. “Not that I thought you were,” she muttered, “that was only Mum’s tease, you know it was.”
They say you can’t miss what you never had. Along with a thousand other platitudes, proverbs and hop-skip-jumps over your sorrows, they say that. And she wouldn’t blame anybody for making word-ways around the bones of the matter. Anyway, she thought, isn’t this what they call a cliché, me taking it out on a useless lump of dough because I can’t have a go at him? A strand of her hair fell from the mesh of hairpins, tickled her brow until she tucked it away, her hand dusted with flour, her forehead moist. “Mid-brown,” she said to herself, remembering how he had called her fair.

“I am not. I’m no blonde.”
“Fair like a bun.” Then, when she hit him gently but meaning it, he’d tried to explain, “Like a little cake. A zeppole, browned outside, light in the middle.”
“A zep what?”
“Z-e-p-p-o-l-e.”
See, he knew she couldn’t spell – or, only by sound. The tragedy was, he had known her, through and through. But not in the Biblical way, not in the under the blankets and off with your clothes kind of a way. Too good for his own good, that had been his trouble. He held back, believing in the sank-tit-tea of marriage, while she had longed… Now, shall I laugh or what, she asked herself, because now it was time for this dough to rise.
Her hands were lightened, floury, empty once the dough was set on the warming shelf. Anticipating the smell of fresh bread, the warmth of a new loaf, she sat at the table and made patterns in the mess there. And she considered the ways he had known her, doubting that anybody would ever have the measure of her again. How was she going to explain to somebody else that she liked to kiss in the dark? That she thought her nose too big for daylight, her teeth imperfect? With her eyes closed, she felt him breathing into her breathing, sighing as he whispered that she was beautiful. The truth of her loss came over her then, like the sense of impending illness, a shiver, a dryness in her throat.
From her apron pocket, she took out the postcard of Venice. A photograph of a narrow canal, with a gone-doe-la vanishing under a fancy bridge and geraniums in pots that hung from the buildings. The scene was painted over in pinks and greens. Fairyland colours. She turned it over and read the date: 21st December 1917. Then his words: My Dearest Iris, see here is a postcard of Venice, where we will laze together one day. I am not here, or is that I am not there? I am on a mountainside with two of my British pals, as you say. We have some tree on our heads, on our helmets, for camouflage. With every breath, with every step, I miss you.
Finally, she admitted it wasn’t the lack of a trip to Venice that upset her. What was one watery city, even the so-called Bride of the Sea, compared to a single evening in his company? She studied the postcard yet again. Although she had read his words a hundred times, she hadn’t previously noticed the small printed writing in the corner of the card. Well, I’m reading you now, she thought. Venice, it said. And then a final message: Bridge of Sighs.
It was so like him that she smiled even while she sighed: just as he must have done.